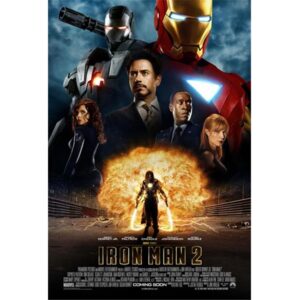 Just got home. First impression? Fantastic. Not quite as good as the first movie, but far better than most sequels. It’s too bad IM2 came out three weeks AFTER Kick-Ass, because while it definitely carries Kick-Ass‘s momentum, it doesn’t necessarily build upon it. Had the two movies been reversed, I think IM2 would’ve felt a lot more special than it does, now.

Below are random notes as I think of them:

Changes a-plenty to many characters’ origins and backgrounds, but nothing that Bendis, Millar, or Warren Ellis wouldn’t have done in the Ultimate Marvel Universe. A much bigger role from Sam Jackson as Nick Fury this time around. Scarlet Johansson as the Black Widow (Natalie Rushman/Natasha Romanov) was kind of superfluous, and her fantastic fight scenes are unfortunately severely overshadowed by Hit-Girl’s, but she was a welcome addition to the cast. Don Cheadle replacing Terrance Howard as Lt. Col. James “Rhodey” Rhodes (War Machine) was 100% unnecessary from my perspective. Unless there was something going on behind the scenes that we don’t know about, I don’t think the change was a wise decision.

Mickey Rourke as Ivan Vanko (or Whiplash, if you will) was awesome. It was the first time I ever felt as though Whiplash/Blacklash was a threat to Iron Man, but he was QUITE a threat. Sam Rockwell’s role as Justin Hammer was very entertaining. I don’t know much about Hammer’s character in the comics, but I completely buy the film’s version being a solid interpretation.

Robert Downey, Jr. owns the Tony Stark role. It will be a shame when he can no longer play the Golden Avenger due to real life getting in the way. Gwyneth Paltrow is also a solid return to form as Pepper Potts. She’s got a smaller role this time around, but is just as essential to Tony Stark’s life. And the after-credits bit will pump up audiences for Marvel’s next movie offering.

I feel that Iron Man 2 is a worthy successor to the first movie, despite what the critics may have been saying. I’ll see this at least once more in theatres, and it is definitely going to end up on my DVD shelf.

From the last week: