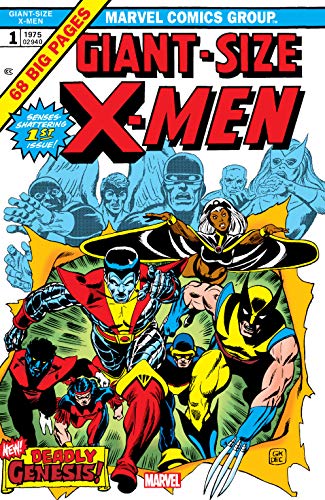 In the last several months, I’ve been seeing numerous people online asking, “Where should I start reading X-Men?” The subreddit community, /r/xmen, literally gets 3-5 of these posts a week. So I decided to come up with the best answer I could, as someone who’s been reading X-Men comics for almost 30 years.

Keep in mind, this is NOT a “Best X-Men Stories” or “Best Eras of the X-Men” list. This list is meant for someone who’s seen one or more of the cartoons, or a few of the movies, and wants to enjoy more! If you’re one of those people? Here are six places you can begin your X-Men journey:

Uncanny X-Men #1 (1963)
It’s hard to say that there’s a better place to begin than the beginning, right? Well, in the case of the Uncanny X-Men, there’s actually quite a few better places to start. The 1960s era of X-Men sold so poorly, that after issue #66 the following couple years of issues were just reprints, and the title was eventually cancelled with issue #93. I usually advise reading this era of the comic later, coming back to these as though they were bonus materials. But, if you’re the type that HAS to start at the beginning, this is it. Issue #1 introduces Cyclops, Iceman, Angel, Beast, Jean Grey, Professor X, and Magneto. The next several issues introduce such legendary foes as The Blob, the Brotherhood of Evil Mutants, the Juggernaut, and the Sentinels. You get to watch the budding romance of Cyclops and Jean Grey from when they were both teenagers too timid to talk to each other. Havok, Polaris, and Sauron appear towards the end of this period. It’s not AWFUL, it’s just VERY written for a teen-age audience in the 1960s.

Giant-Size X-Men #1 (1975)
“Second Genesis” is possibly the most appropriate title that could ever be given to this comic book’s story; This issue introduces Wolverine, Storm, Colossus, Nightcrawler, Banshee, and more to the X-Men team. The following issue, Uncanny X-Men #94, is written by Chris Claremont, and continues this team’s ongoing adventures until Claremont eventually leaves the title with issue #279. Classic tales such as The Dark Phoenix Saga, Days of Future Past, The Brood Saga, the Mutant Massacre, Fall of the Mutants, The X-Tinction Agenda come from this era. Characters like Rogue, Gambit, Psylocke, Kitty Pryde, and plenty of others join the team during this time period. In short: everything we know and love about the X-Men comes from Claremont’s nearly 200-issue run, and it begins here.

X-Men: Grand Design (2017-2019)
Ed Piskor’s auteur take on re-telling & streamlining the stories of the X-Men from 1963-1991 actually makes for a very convenient jumping-on point; You get 28 years of history condensed into a half-dozen issues, with indexes telling you what specific issues to find any particular story you find interesting. This goes over everything from X-Men #1 to Giant-Size, all the way until the end of Chris Claremont’s run. I guess the best way to describe this is that it’s like the Cliff’s Notes of X-Men comics; It’s great for getting your feet wet, without having to dive straight into the deep end.

X-Men #1 (1991)
This is literally the best-selling single comic of all time, with over 8 million copies in print. The 1990s X-Men cartoon series has its entire visual look based on this issue. (And, incidentally, my personal introduction to the X-Men was shortly after this came out.) Full of the frenetic, high-energy, hyper-realistic artwork of Jim Lee, this is the beginning of Claremont’s last story arc. He’s followed by the excellent Fabian Nicieza, who picks up almost seamlessly with where Claremont left off. The X-Men team split into two squads, with the “Blue team” taking over this title, and the “Gold team” having adventures in the classic, Uncanny X-Men series. This comic is titled “Mutant Genesis,” and that’s appropriate: For the majority of the 1990s, the two X-Men comics were almost always at the top of the sales charts along with their other mutant-related comics. The X-Cutioner’s Song, Fatal Attractions, Age of Apocalypse, Onslaught, Operation: Zero Tolerance, and The Magneto War all derive out of this period of X-books.

There are people who claim that Grant Morrison’s “New X-Men” era from 2001 works as a jumping on point, but I disagree; I think it works VERY well as a coda to the 1990s era of X-Men, but I’m not convinced it’s a great place to START. Is it worth reading? Absolutely. Just maybe don’t start with it.

Astonishing X-Men #1 (2004)
Buffy the Vampire Slayer and Firefly creator, Joss Whedon, along with artist John Cassaday, redefine the X-Men for the modern era (immediately after the previously-mentioned Grant Morrison run), with a story focused on a “cure” for the mutant gene. Well-developed characters and gorgeous artwork define this 24-issue run. Much like Grand Design, this is a great place to give the X-Men a chance without having to buy too much — You can get this entire run in two Trade Paperbacks. Hop in for a few stories, see if you like it, and either continue on or jump off without too much time or money invested.

House of X & Powers of X (2019)
Look, it’s the year 2020 when I’m writing this. If you’re interested in the X-Men, you’re probably at least passingly familiar with them from one of their three animated series or their 7 live-action motion pictures. You know X-Men is a story about heroes defending a world that hates and fears them. This is the next step in their journey. Jonathan Hickman’s complete redefinition of what the X-Men are all about in these two intertwined miniseries from last year (often shorthanded to “HOX/POX”) is a perfect place to jump on, because you don’t NEED to know a ton about the X-Men going in, but you’ll definitely get more out of this story the more you know. The follow-up, Dawn of X re-launch of six monthly X-Men family titles is what’s being published RIGHT NOW, and we’re about to get a handful more. This is going to be the fastest way to get caught up with the current conversation, without having to read decades of continuity.

So there you go. Six hopefully viable options.

“But,” I hear you asking, “where would you start if you were me?”

Knowing what I know? I’d probably start with X-Men: Grand Design, and then go immediately into House of X & Powers of X. Grand Design will give you enough overall basic knowledge of the X-Men that you’ll be able to follow most future stories you read, and HOX/POX gets you fairly up to date in today’s X-Men conversations. And then you can go back and fill in the gaps as you see fit.